The golf world was abuzz last week as Tiger Woods benched his Scotty Cameron Newport 2 GSS putter, a club he used to win 13 of his 14 major titles, and opted to use a TaylorMade mallet, an Ardmore 3, at the Quicken Loans National.

Before the event Woods said that while he putted well during the West Coast Swing, in his four events leading up to the Quicken Loans National he had putted poorly – and statistics suggested the same. He changed putters after working extensively with several clubs after the U.S. Open, and he hoped the change might help him see his lines and swing the head through the ball more effectively.

Woods did not come out and say he would continue using the TaylorMade putter, but he clearly was pleased with how he putted at the Quicken Loans National.

“I’m starting the ball on my lines again, and I’ve got the speed,” he told Dottie Pepper during his post-round TV interview. “I hit a lot of good putts that didn’t go in, which is fine, as long as I’m hitting good putts and seeing my lines. That’s something that I have been missing for a while now. For the last two months, I really hadn’t had it. This week I turned it around.”

As with his Newport 2, Woods’ Ardmore 3 has some things in common with the putter that can be bought in a golf shop, but it is not exactly like the retail model. 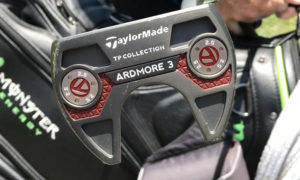 First, there is the finish. Technically, Woods’ putter is a TaylorMade TP Black Copper Ardmore 3, but the Black Copper putters available at retail are significantly darker than Woods’ putter. They have a brownish, non-glare tone with brushed areas where a copper tone shines through, giving the clubs an antique look. They also are trimmed with copper-colored weights in the sole.

As can be seen in the above photo, Woods’ putter is gray toned, and the former World No. 1 uses lighter weights than found in the standard TP Black Copper Ardmore 3. Instead of the stock 10-gram weights in the heel and toe, Woods’ putter has 2.5-gram weights. So unless TaylorMade has done something to add weight somewhere else in the head, Woods’ putter is probably 15 grams lighter than the 350-gram standard Ardmore 3. That would make sense because, according to Scotty Cameron, Woods’ Newport 2 weighed 326 grams when it was new. The lighter 2.5-gram weights could make transitioning to the mallet easier.

The standard TP Black Copper Ardmore 3 has an L-neck hosel and a single alignment line on the back, and TaylorMade says it has 12 degrees of toe hang. Woods’ Ardmore 3 has the white alignment line, but it has a shorter, curved neck that is available in the Red-White putter family. It creates more toe hang, which should promote a stroke with more arc.