Wilson Staff’s new “mystery iron,” is official, although those paying attention to social media the last few days realise it’s the kind of mystery anyone could have solved. What’s been lacking from Wilson is that “grab-you-by-the-shirt-gotta-have-it” club that gets the industry. Could the long-rumoured and much-anticipated C200 iron be that club? C200 – A New HopeOn the surface, the C200 is the next-phase replacement for Wilson’s C100 Game Improvement iron, sliding into the “C” or “Crossover” category in Wilson’s Feel-Crossover-Distance, 0r F-C-D, program. In plain English, D equates to Super Game-Improvement, C is Game Improvement and F is for better players.More or less.But according to Michael Vrska, Wilson’s Global Director of R&D, the C200 packs an innovative punch unlike anything Wilson’s ever delivered before, and that’s due to something called FLX Face Technology. “FLX Face Technology is, simply, the limited contact points between the body and the face of the iron head. That, and the resulting Power Holes, allows the face to flex and create greatly improved ball speeds.” – Michael Vrksa, Wilson Golf

CT, FLX Face and You

Any discussion on FLX Face Technology requires a brief primer on Characteristic Time, or CT.Simply stated, CT measures – in microseconds – how much time the ball spends on the clubface at impact. USGA rules limit CT to 239 microseconds, with a max tolerance of 18, for a maximum CT of 257 microseconds. Essentially CT measures and limits the spring-like flex, or deflection, of the clubface, which, in turn, limits how hot the clubface can be. That, in turn, potentially limits ball speed.And that, in turn, potentially limits distance.Got it?You’ll be hearing a lot about face deflection, or flexing, in irons this year. TaylorMade started it all last year with Face Slot Technology in the RSi’s, while Ping’s G-Max irons introduced Cor-Eye technology last summer. Both technologies are designed to create more deflection across the club face, maximizing distance on sweet spot strikes while minimzing distance loss on off-center strikes (remember #misshitshappen?).FLX Face Technology is Wilson’s unique method of trying to do the same thing.

“We had some early prototypes with CT’s over 270, which is incredible for an iron. We knew we had something from the beginning of this project and wanted to step over the line, so to speak, to see just how far this technology could go. But the plan was always to get back within the USGA limits.” – Michael Vrksa

Take a good look at the C200’s head and two things jump up and say howdy – little slots all the way around the sole, toe and topline, called “Power Holes,” and black goo filling those slots. Both are integral to the FLX Face goal: maximum clubface flex for more “facetime” at impact. 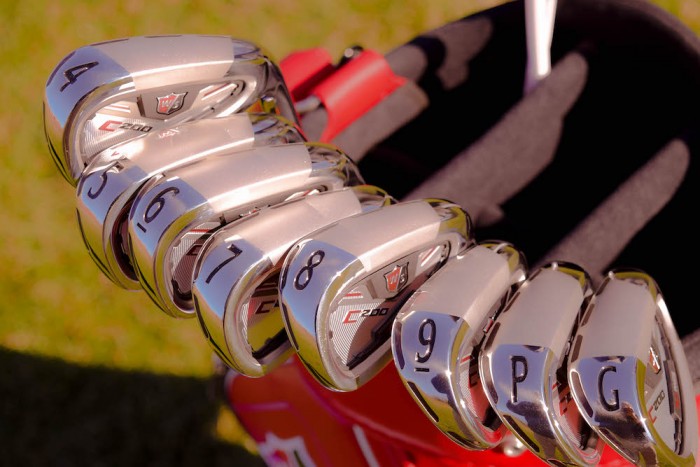 May The FLX Be With You

Those Power Holes are a key element of FLX Face Technology. Their purpose is to separate the face from the body, allowing the face to flex at impact. Only 24% of the face actually connects to the body, isolated only to the perimeter, while 76% of the topline, toe and sole aren’t connected to the club body at all.That, says Wilson, is how you flex a face.

“FLX Face Technology allows the face to flex more in an iron and get right at the USGA CT limit, which increases ball speed. Faster ball speeds with the right launch angle and spin rate maximizes distance. Interestingly, a number of players – unaided – said it feels like the ball collects on the face for a split second longer before shooting off.” – Michael Vrska

C200’s face and head are made of 17-4 stainless steel, not a particularly exotic or innovative material in golf. Wilson says it tested other materials, but found 17-4 with FLX Face trumped any performance benefits more exotic materials could offer.“Some of the early prototypes had CT’s over 270, which is incredible for an iron,” says Vrska. “However, some of those prototypes only lasted a few impacts before breaking. Bottom line is the 17-4 face gives us a great combination of strength and power, with a CT at the limit.” 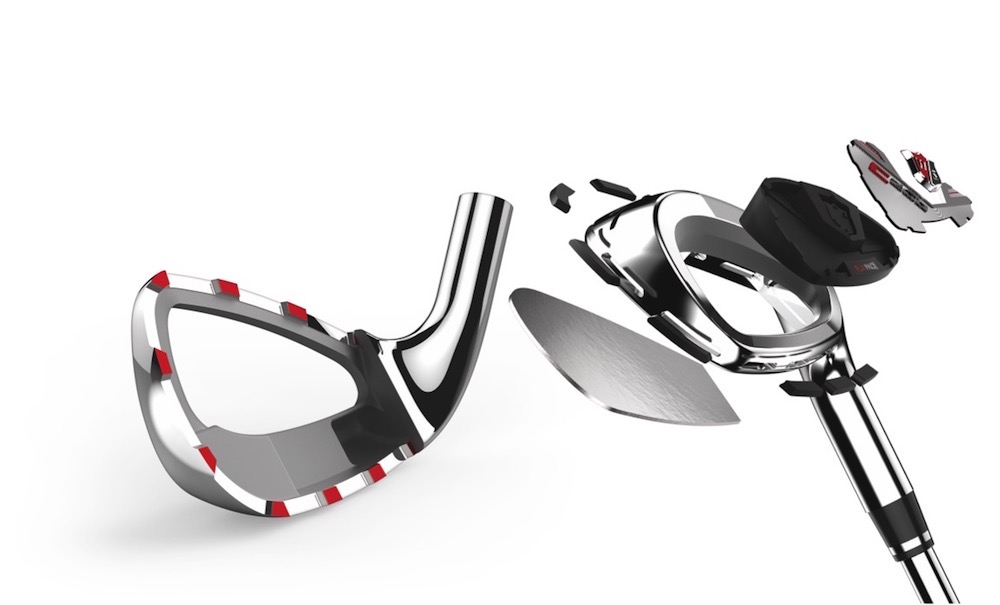 Wilson’s design team went though batches of concept irons using CAD and FEA (Finite Element Analysis) before settling on the final FLX Face/Power Hole design. According to Wilson, that design produced over 1.5 MPH faster ball speeds than earlier prototypes without FLX Face, translating to 5-yards more carry.Wilson also says FLX Face increases launch angle slightly and allows weight to be moved around the head, making the C200 about 8% more forgiving than previous models.We can already hear the hue and cry from purists already over the Power Holes, but it’s important to remember the C200 is a Game Improvement iron, in all its wide-soled and back-face-badged glory.

“We wanted to keep the technology visible and easy to understand. The offset, topline and shape of the club are fairly classic, and the Power Holes blend in nicely while doing their job. We’ve had hundreds of players hit this club, including all our tour players, and there have been very, very few negative comments about the look at address, and none after hitting the clubs.” – Michael Vrksa

The Power Holes are filled with a soft polymer goo called TE031 Urethane. It’s the first time Wilson has used this material and they believe it may be the first time it’s been used in golf, period. What is clear after gaming the C200’s for several rounds is the combination of FLX Face, Power Holes and TE031 Urethane produce a very muted sound and a remarkably soft and very unique feel, especially for a GI iron.Lookswise, the C200’s larger head and face is consistent with the GI category. You’d think the Power Holes would detract from the topline appearance, but in reality the TE031’s black color actually makes the top line appear thinner than it is, giving the club a more classic appearance.

Wilson’s lofts are, for the most part, consistent with others in the Game Improvement category: Closer inspection show a few key differences:Callaway Apex CF16: 1° stronger lofts than the C200 thru the 8 iron, 9-iron is the same, PW/GW lofts are 1° weaker. Wilson stock length is 0.5″ longer through the 9-iron, 0.25″ longer in the PW/GW.Titleist AP-1: Same lofts through the 6-iron, 1° stronger 7-GW. Wilsons are 0.5″ longer through the 9 iron, 0.25″ in PW/GW.Mizuno JPX-EZ: Same lofts through the 9, 1° weaker PW/GW. Wilsons are 0.75″ longer through the 9-iron, 0.5″ in PW/GW.Taylormade PSi: 0.5° stronger lofts in the 4-8 irons, 0.5 degree weaker in 9/PW. Gap wedge is 2.5° weaker. Wilsons are 0.75″ longer through the 9-iron, 0.5″ longer in PW/GW.A check of other OEM’s is consistent: the C200’s are generally weaker in loft but longer in shaft. Depending on your release point, an extra 1/2″ in club length could equal 5 to 7 yards in shot length. If you have an earlier release, however, the extra 1/2″ probably doesn’t help much.What does this mean? Well, in theory, the FLX Face alone should benefit the higher handicap golfer with an early to mid release, while FLX Face plus the extra 1/2″ should make the lower handicap golfer with a later release say “golly.”

So, with all of this information, the question remains: do FLX Face, Power Holes and TE031 goo deliver the distance?According to Wilson, various player testings have shown distance increases ranging from 5 to 13 yards compared to competitive products. Do these claims stand up? Our initial launch monitor testing showed some promising results.We compared the stock C200 6-iron to 3 other off the shelf GI 6-irons to see what we could see.  The irons in question are the Mizuno JPX-EZ, The Callaway Apex CF16 and the Titleist AP-1:Keep in mind the JPX-EZ  and AP-1 irons have the same loft as the C200, but shorter shafts. The Apex CF16 has a 1° stronger loft, but also has a shorter shaft.So in this stock-to-stock comparison, the C200 and AP-1 show the highest balls speeds. However, the higher launch angle and overall higher flight of the C200 led to 3 yards more carry and 6 yards more overall distance than the Titleist. At first blush you could say that’s due to the Wilson’s 1/2″ longer shaft, but the swing speeds for both irons were the same at 80 MPH.So, does FLX Face Technology deliver distance? To a degree, it would seem so. It would also appear custom fitting could unleash more of the C200’s potential. Another consideration: the C200’s are priced the same as the JPX EZ, but $200 less than the AP-1’s and $400 less than the Apex CF16’s. 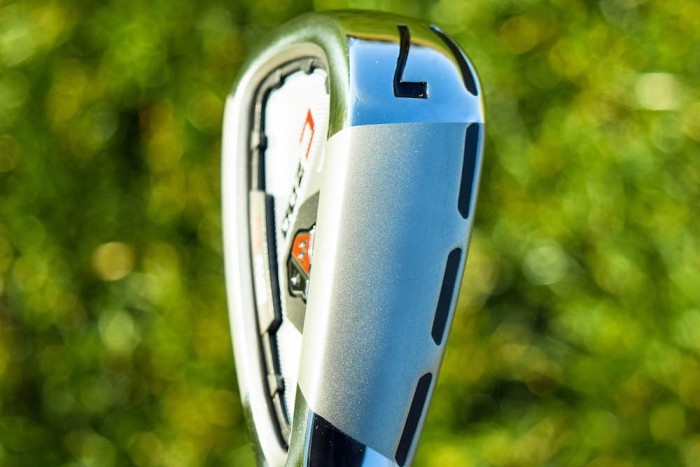 The C200’s are “Crossover” or “C” irons (as are the new FG Tour F5 irons) in Wilson’s F-C-D program. It’s a Game Improvement iron in both looks and performance, but has a unique sound and feel. One of the raps on GI irons is a harsh, clicky feel, but FLX Face and TE031 goo give the C200’s a unique, muted sound and feel that’s fun to hit.

“It’s for any player who wants to hit the ball farther, but still have incredible feel and forgiveness. We expect some of our Tour Players to start using the long irons and have already seen 30+ handicappers hit some of the best and longest shots of their lives with the C200’s” – Michael Vrksa

The C200’s are also stupid-easy to hit, although the stock KBS Tour 90 shaft may be a little whippy for more aggressive swingers. It’s not a problem with the long irons, however, as the 4-5-6 irons are very easy to get airborne.While the KBS Tour 90 is stock, Wilson offers several no-charge options: KBS Tour, KBS Tour 105 and KBS Tour-V as well as True Temper’s Dynamic Gold, Dynamic Gold DG Pro, Dynamic Gold XP and SL85.For graphite, Wilson is the first OEM offering the new Aldila Rogue Pro.

See the Wilson C200 irons at www.golf247.co.uk and be one of the first in the Uk to play with a brand new set of these Wilson irons…